Customers across industries see the potential of VR and AR technologies for a wide range of uses, from maintenance, educating and training employees to create new customer experiences. But, customers are daunted and overwhelmed by the up-front investment in specialized skills and tools required to even get started building a VR or AR application. With Amazon Sumerian, it is now possible for any developer to create a realistic, interactive VR or AR application in a few hours.”

Amazon Sumerian is a new service by AWS that makes it easy and quick to create apps in AR, VR and 3D. It does this by way of providing many pre-configured building blocks to make creating apps quickly and with less coding to cover the basics like inanimate objects and the basics of a human form. 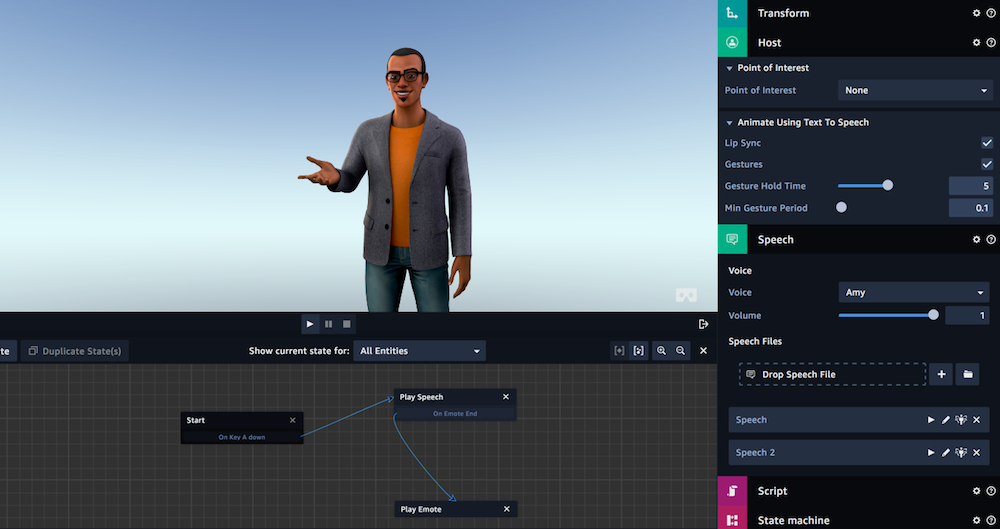 Amazon wants to ensure that AWS Sumerian is easy to use to push more and more developers towards creating apps in latest technologies like 3D, VR, and AR. They need no specific experience in AR or VR programming and they can design life-like immersive environments without worrying about any platform that will run the app. The website points out the steps required to create an app which includes uploading the assets in the supported FBX and OBJ format for 3D assets, creating a host, editing the scene and the publishing the scene. Some of the possible use case scenarios include employee education, training simulations, retails and sales, and field service productivity.

At the core of Amazon Sumerian is a web-based editor for constructing 3D scenes with animation, scripted interaction, and special effects, which provides tools and resources that allows anyone to create and run augmented reality (AR), virtual reality (VR), and 3D applications with ease.  The editor runs in your web browser, and all of your data is stored in AWS. The editor outputs scenes to Amazon CloudFront as a static website that you can load directly into any WebVR-compatible browser and headset, or embed in your website for others to access.

With Sumerian, you can build multi-platform experiences that run on hardware like the Oculus, HTC Vive, and iOS devices using WebVR compatible browsers and with support for ARCore on Android devices. Sumerian also lets you create augmented reality (AR) applications. An AR application can use your phone’s camera or an AR-compatible headset to overlay graphics on the real world. Sumerian provides a template and sample application for creating ARKit applications for iOS phones and ARCore applications for Android. 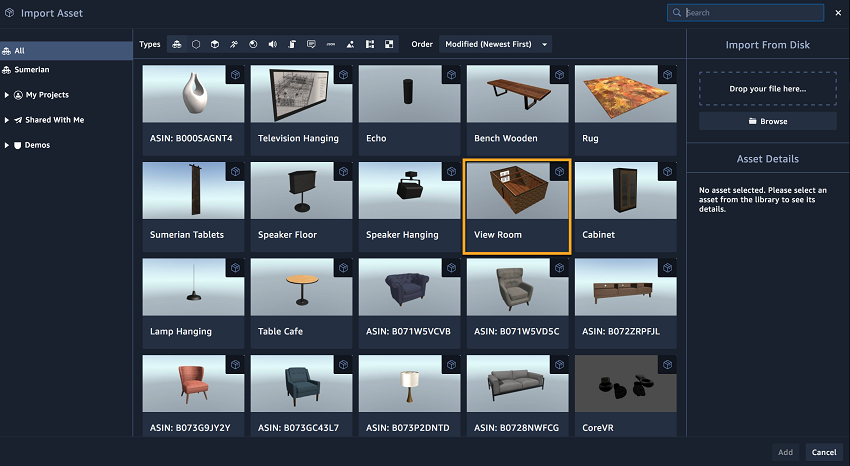 Sumerian provides a library of optimized 3D objects and scene templates that you can use to construct scenes without any existing assets. If you do have 3D models, you can import them with their animations and textures by dragging them from your file system into the editor canvas. Sumerian supports models in OBJ and FBX formats.

Amazon Sumerian, currently in preview, delivers features to allow you to design highly immersive and interactive 3D experiences from your browser. Some of these features are:

Since Amazon Sumerian doesn’t require you to have 3D graphics or programming experience to build rich, interactive VR and AR scenes. When you first Sign in to Amazon Sumerian, you see the Dashboard home screen. From the home screen, you can:

Amazon Sumerian lets you create virtual reality (VR) and augmented reality (AR) scenes that are made up of components and entities, organized into projects. Let’s look closely at the concepts used in the Sumerian editor and this guide.

1. Scenes: A scene is a 3D space that contains objects and behaviors that define a VR or AR environment. Objects include geometry, materials, and sounds that you import from a supported file format, and objects that you create in the scene like lights, cameras, and particle effects. Behaviors include state machine behaviors, animations, timelines, and scripts.

2. Components and Entities: All objects and behaviors are components that combine to create entities. For example, when you import a 3D model and add it to a scene, the editor creates an entity that has a geometry component, a material component, a transform component, and an animation component. You can then use the editor to add a rigid body, colliders, and other components to the entity.

3. Assets: Assets are the images, sounds, scripts, models, and documents that you import into Sumerian to use in a scene. You can manage assets independently of the scenes that use them in the asset library. Assets can belong to a user or project.

4. Hosts: A host is an asset provided by Sumerian that has built-in animation, speech, and behavior for interacting with users. Hosts use Amazon Polly to speak to users from a text source. You can use hosts to engage users and guide them through a VR experience.

5. Projects: Projects are an organizational tool for managing scenes, assets, and templates.

6. Templates: Templates let you save a copy of a scene to use as a starting point for other scenes. Templates belong to a project. Sumerian provides several templates, which you can access from the dashboard.

The Sumerian 3D engine provides a library for advanced scripting with JavaScript, but you don’t have to be a programmer to create interactive VR! Use the built-in state machine to animate objects and respond to user actions like clicks and movement. As an advanced functionality, with Sumerian, we can add scripting to Entity assets to make my scene even more exciting by adding a ScriptComponent to an entity and creating a script.  We can use the provided built-in scripts or create my own custom scripts.

When you’re ready to share your work with the world, you can publish it directly to Amazon CloudFront as a static website that can be viewed with any WebVR-compatible browser and headset. Publish your scene. Your completed scene is stored in the cloud and has a unique URL which you can use to access it.

There is no charge to use Amazon Sumerian during the Preview. Sumerian offers a 12-month free tier to help you get started. As part of the AWS Free Tier, you can get started with Amazon Sumerian for free. Upon sign-up, new customers can create a 50MB published scene that receives 100 views per month for free, for the first 12 months.

In my opinion with a final version, there will be no charge to design and edit your augmented reality (AR) and virtual reality (VR) applications. Instead, you will be charged based on the amount of storage used for the 3D assets you store in Sumerian and the volume of traffic generated by your scene. You also pay for the costs of any other AWS services, like Amazon Lex and Amazon Polly, that your Sumerian Host uses. There are no upfront costs or minimum fees. 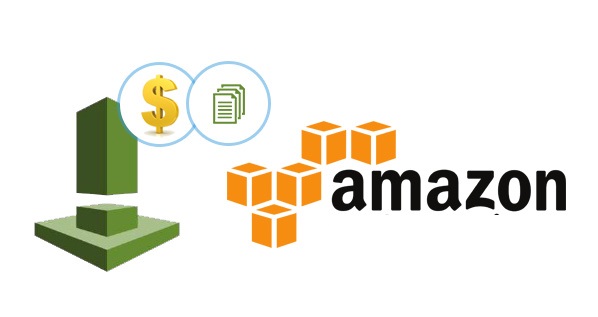 Amazon is focusing here on very practical end-points: “training simulations, virtual concierge services, enhanced online shopping experiences, virtual house or land tours” are among those it names could be improved with the use of virtual environments populated with animation and 3D and more natural interactions with users.

The service also brings together a lot of what AWS has been doing in other areas by trying to simplify otherwise-complex new computing applications. The company also announced a new consultancy to help people build more AI-based services, Gluon, a simplified machine-learning model builder. The bigger picture here is that the new wave of computing and technology has a lot of coding and other time-consuming processes behind it, and Amazon wants to be the one to modernize and simplify that — thereby becoming the default platform for creating applications on that new tech.

In my opinion is that Amazon Sumerian is an incredible tool. Amazon Moving Towards Industry 4.0, organizations which recognize the value of being ecosystem enablers, rather than just end-user service providers, will be the winners in this brave new world.