The real-time integration of digital information with the user’s environment in real time. AR technology is useful to superimpose information on the world we see. For example, 3D model, Holograms or images, and sounds are superimposed over what the user sees and hears. Picture the “Minority Report” or “Iron Man” style of interactivity. 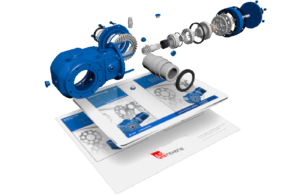 Unlike virtual reality, which creates a totally artificial environment, augmented reality uses the existing environment and overlays new information on top of it.

Augmented reality apps are written in special 3D programs that allow the developer to tie animation or contextual digital information in the computer program to an augmented reality “marker” in the real world. When a computing device’s AR app or browser plug-in receives digital information from a known marker, it begins to execute the marker’s code and layer the correct image or images.

Today the AR technology is used in many industries including healthcare, public safety, gas and oil, tourism and marketing.

The future of augmented reality

The ultimate goal of augmented reality is to create a convenient and natural immersion, so there’s a sense that phones and tablets will get replaced, though it isn’t clear what those replacements will be. Even glasses might take on a new form, as “smart glasses” are developed for blind people. Apple’s new iPhone-X is equipped with special depth camera that can scan a human face and build enrich 3D map.

The AR revolution will come not with a bang but a tape measure. At least, that seems to be the lesson so far from ARKit, Apple’s new augmented-reality platform. It leverages the graphics and processing chips inside existing iPads and iPhones, in addition to motion sensors or Google ARCore platform to allow developers to create apps like Pokemon Go that supplant digital objects on top of the real world.

Meat and Potatoes in Augmented Reality

PTC has the most robust Internet of Things technology in the world. In 1986 we revolutionized digital 3D design. Now our leading IoT and AR platforms and field-proven solutions bring together the physical and digital worlds to reinvent the way you create, operate and service products. PTC's Vuforia is the world’s most widely used platform for AR development which provides support for leading phones, tablets and eyewear

In an interview to The Independent earlier 2017, Cook said that “the smartphone is for everyone, we don’t have to think the iPhone is about a certain demographic, or country or vertical market: it’s for everyone. I think AR is that big, it’s huge. I get excited because of the things that could be done that could improve a lot of lives”.

At Worldwide Developers Conference (WWDC-2017), Apple announced their first augmented reality software development kit, ARKit AR-SDK and offers developers the chance to create digital content on top of real-world scenery on iOS 11 and above for iPhone and iPad through what Apple refers to as “World Tracking”.