ARReverie added a new tracking method which will detect an ImageTarget without creating external Marker database by combining multiple tech together such as P3P and optical flow for a more reliable reading key.

The system recognizes and track supports multiple images based on detection initialization at speeds of tens of milliseconds. Calibration, identification, and tracking of fully autonomous kept up to hundreds of detected images; working dynamic loading and saving individual images or sets.

ARReverie provides ARToolKit+ plugin for Unity brings the full functionality of ARToolKit into the Unity3D visual development environment. It consists of a set of Unity script components which integrate seamlessly with your Unity project, native plugins which implement the underlying core functionality, and a set of examples and accompanying resources that act as starting points.

Note: Plugin cost 45$(One Time) only and this amount will help the ARReverie  Technology to explore the latest tech and transfer the knowledge. 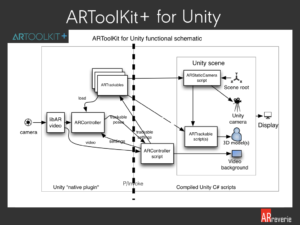 As a quick start with Unity3D and ARToolKit+, we are using one of the default example scenes shipped with the ARToolKit+ Unity package. This Tutorial describes how to create and demonstrate augment reality application using the Unity3D IDE and the ARToolKit+ for Unity SDK.

For the first tutorial, we’re going start from scratch and create an application that recognizes an image exposed to the computer’s/Mobile’s camera, tracks the image and augments a 3D model in the video feed over the tracked image.

As discussed earlier Support for ARToolKit+ for Unity and the Unity3D IDE on Windows 10 is under test and is forthcoming. “MacOS based Unity3D IDE” is recommended.

Here in this tutorial, we are targeting Android as a deployment Platform, We will be using ARToolkit+ AR SDK by ARReverie and Unity 3D engine and Android SDK for this tutorial. Make sure you have downloaded the following before proceeding further.

IMP NOTE:  ARToolKit+ support Mac, Android, iOS or Linux as a deployment platform so we need to build the project for any of them inside Unity build settings. If there any error occurs like ‘ARToolKit+: Build target not supported’ just ignore it for now.

Now the fun part begins!!! let’s download 3D model with some animations for our augmented reality. For this tutorial, we choose one Green Spider from Unity Asset Store (free).

Afterward, we introduce our 3D model (downloaded from Asset Store) into parent ImageTarget, to do this:

NOTE: This AR app will work on ImageTarget/Marker_Image even with a black and white image of the stones because the feature points will still remain (they usually depend on other factors like gradient, etc. instead of color).

You can download Marker Image from here. The target image is required that your computer’s camera will recognize and track while demonstrating ARToolKit6 Augmented Realty example applications.

We are almost done. Let’s save the scene: File >> Save Scene and move towards deployment step. At this point, if we select “Run” and point a print out of the image towards our webcam, the Spider get augmented over printout.

The last step is to build the project for Android. We need to go to “File >> Build Settings”. We need to add the current scene by selecting “Add Open Scene”. Then, we need to select a platform (Android) and then select “Switch Platform“. Here, we will have multiple options:

Unity provides a number of settings when building for Android devices – select from the menu (File > Build Settings… > Player Settings…) to see/modify the current settings. 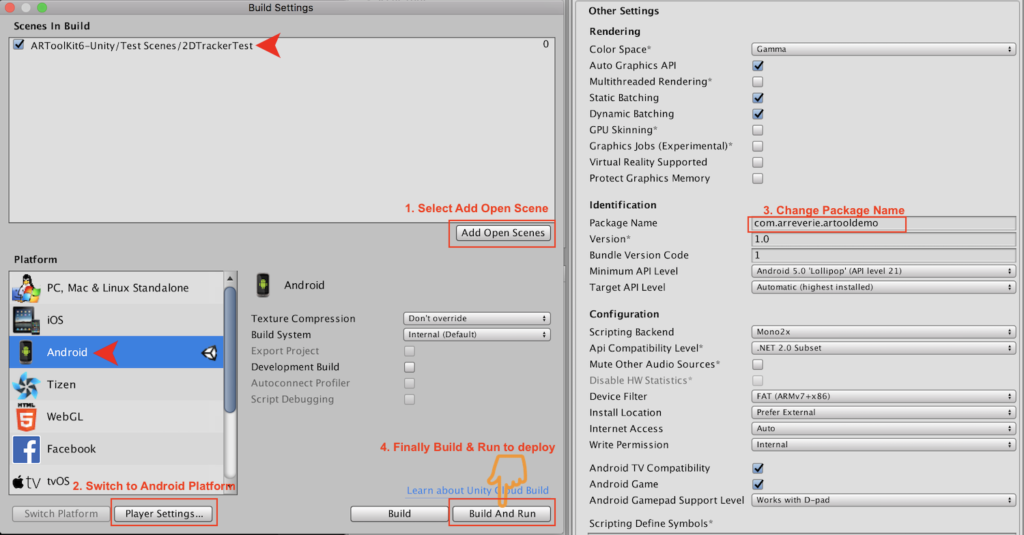 Before pressing the Build And Run, we need to make some more changes in the “Player Settings” options in the Inspector panel:

Now, we can proceed to “Build and Run”. Other changes like Minimum API Level etc. can be made as per additional requirements. We will need to connect an Android mobile device via USB and enable USB debugging.

NOTE: We will also need to have an Android developer environment set up before we can test our Unity games on the device. This involves downloading and installing the Android SDK with the different Android platforms and adding our physical device to our system (this is done a bit differently depending on whether we are developing on Windows or Mac).

If you get stuck at any point, feel free to post us in the comment section below.