Awake as “initialize me” and Start as “initialize my connections to others.” You can’t rely on the state of other objects during Awake, since they may not have Awoken themselves yet, so it’s not safe to call their methods.

Start function is called only if the script component is enabled. Awake function called when the script instance is being loaded.

If the script is NOT enabled at the beginning of your game, and you don’t need the variables to be initialized, start() would be saving performance as awake() would be called regardless.

In Unity scripting, there are a number of event functions that get executed in a predetermined order as a script executes. This execution order is described below: 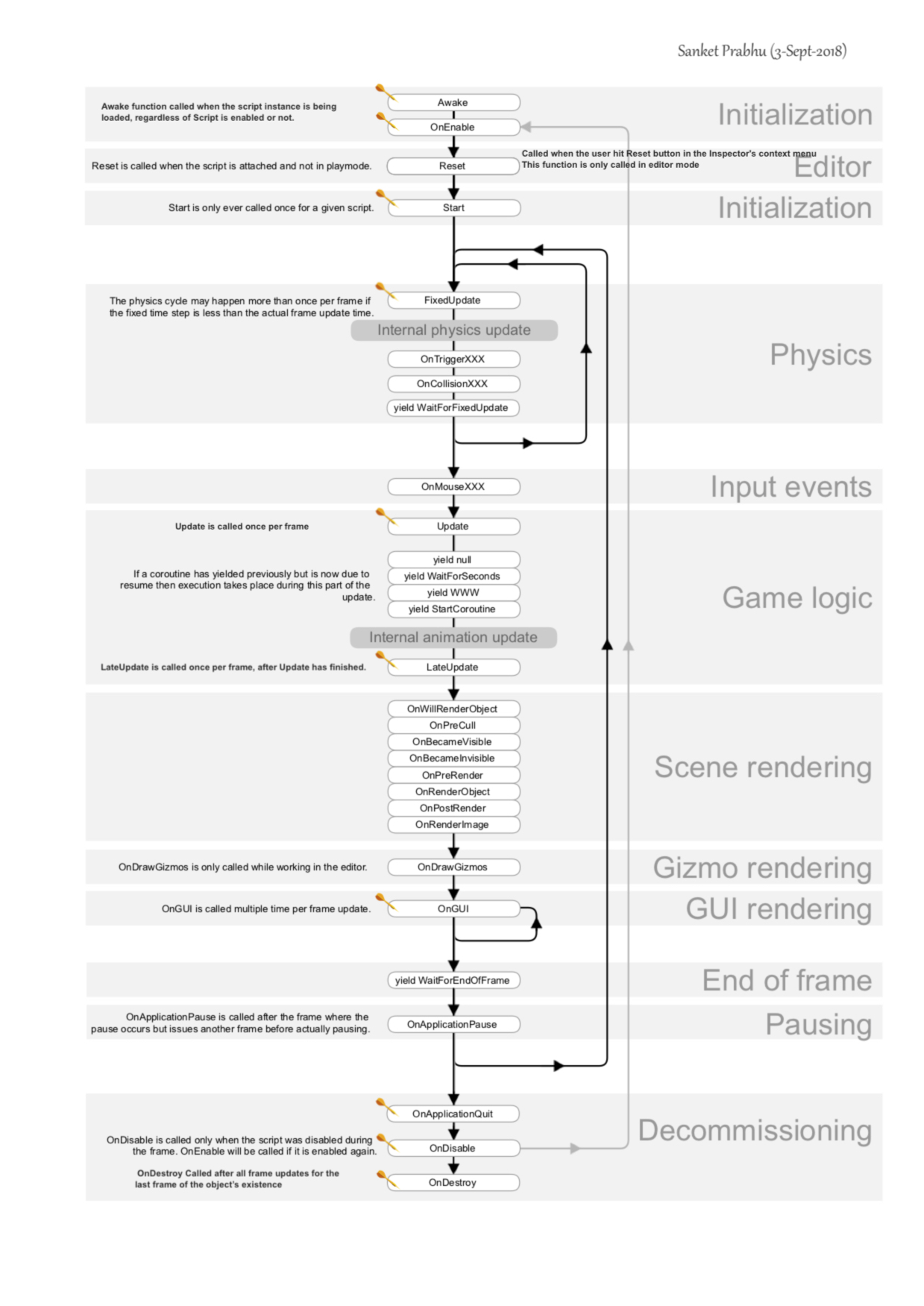 Q4. What is time.deltatime in Unity explain the use of deltatime?

In unity, Time.deltaTime will provide you time in seconds it took to complete the last frame (Read Only). This can be used to make your game frame independent.

When you multiply any value with Time.deltaTime you essentially express: I want to move this object 10 meters per second instead of 10 meters per frame.

Q5. What is Coroutine, is it running on a new thread?

While Coroutines seem to work like threads at first glance, they actually aren’t using any multithreading. They are executed sequentially until they yield. Coroutine might seem like it is a thread, but coroutines execute within the main thread.

The disadvantage of not doing “real” multithreading is that you can not use coroutines to parallelize CPU-intense calculations over multiple CPU cores.  With the release of Unity 2017, it is now possible to use a new C# feature called async-await for our asynchronous methods instead. This comes with a lot of nice features compared to coroutines.

Let’s look at a simple example. Given the following coroutine:

The equivalent way to do this using async-await would be the following:

To draw a GameObject on the screen, the engine has to issue a draw call to the graphics API (such as OpenGL or Direct3D). Draw calls are often resource-intensive. Unity deal with draw call using the following two techniques.

The purpose of both functions is same, to destoy gameobject, but there isa very small difference, which is very crucial to understand, wrong use of these function can cause your app to crash

Q8. Is this possible to collide two mesh collider, if yes then How?

Information is based on Unity version 2018.2:

IL2CPP (Intermediate Language To C++) is a Unity-developed scripting backend which you can use as an alternative to Mono when building projects for various platforms. IL2CPP (An ahead-of-time (AOT) compiler) supports debugging of managed code in the same way as the Mono scripting backend.

When building a project using IL2CPP, Unity converts IL code from scripts and assemblies to C++, before creating a native binary file (.exe, apk, .xap, for example) for your chosen platform. Some of the uses for IL2CPP include increasing the performance, security, and platform compatibility of your Unity projects.

Each Scripting Backend has benefits and drawbacks that should influence your decision on which is the right choice for your situation:

Unity reserves some project folder names to indicate that the contents have a special purpose. There are a number of folder names that Unity interprets as an instruction that the folder’s contents should be treated in a special way. Some of these folders have an effect on the order of script compilation. These folder names are:

The phases of compilation are as follows:

A common example of the significance of this order occurs when a UnityScript file needs to reference a class defined in a C# file. To achieve this, you need to place the C# file inside a Plugins folder, and the UnityScript file in a non-special folder. Because C# code is compiled before JS code, so in general, while JS code can access C# classes, the opposite is not possible If you don’t do this, an error is thrown saying that the C# class cannot be found.

Q3. Explain What Is Prefabs In Unity 3d?

Prefab in Unity 3D is referred for pre-fabricated object template (Class combining objects and scripts). At design time, a prefab can be dragged from project window into the scene window and added the scene’s hierarchy of game objects. If desired the object then can be edited.

At the runtime, a script can cause a new object instance to be created at a given location or with a given transform set of properties.

Q4. What is the difference betweenAsset Bundles, Resources and StreamingAssets Folder?

There are several ways to serve up resources to Unity at runtime, and each method has its place in game development: asset bundles, resource folders, and streaming assets.

# Asset Bundles:
Asset bundles let you deliver content to your application outside of your Unity build. Generally, you’d host these files on a remote web server for users to access dynamically. Asset bundles can contain anything from individual assets to entire scenes, which also makes them ideal for delivering downloadable content (DLC) for your game.

# Resource Folders:
The Resource folders are bundled managed assets. That means they will be compressed by Unity, following the settings you apply in the IDE. Unlike Asset bundles, resource folders are baked into the Unity Player as part of the game. You can do this by adding the required assets to a folder named Resources in your assets directory.

# Streaming Assets:
Like Resource Folders, a Streaming Assets directory can be created by intuitively creating a folder named StreamingAssetsthat, that you can use to put bundled un-managed assets. Unlike Resource folders, this directory remains intact and accessible in the Unity player. This creates a unique access point for users to add their own files to the game.

Q1. Difference between Class and Structure.

One of the basic design decisions every framework designer faces is whether to design a type as a class (a reference type) or as a struct (a value type).

Both can be invoked without instantiation, both provide only one “Instance” and neither of them is thread-safe.

A static class is basically the same as a non-static class, but there is one difference: a static class contains only static members and a private constructor and cannot be instantiated. In other words, you cannot use the new keyword to create a variable of the class type. The design style embodied in a static class is purely procedural.

Singleton, on the other hand, is a pattern specific to OO design. It is an instance of an object (with all the possibilities inherent in that, such as polymorphism), with a creation procedure that ensures that there is only ever one instance of that particular role over its entire lifetime.

Q3. What is the use of Virtual keyword?

The ‘virtual’ keyword is used to modify a method, property, indexer, or event declaration and allow for it to be overridden in a derived class. By default, methods are non-virtual and you cannot override a non-virtual method. You cannot use the virtual modifier with the static, abstract, private, or overridemodifiers.

For example, this method can be overridden by any class that inherits it:

When we create an interface, we are basically creating a set of methods without any implementation that must be overridden by the implemented classes. The advantage is that it provides a way for a class to be a part of two classes: one from inheritance hierarchy and one from the interface.

There are some similarities and differences between an interface and an abstract class that I have arranged in a table for easier comparison:

Serialization is the process of converting an object into a stream of bytes to store the object or transmit it to memory, a database, or a file. Its main purpose is to save the state of an object in order to be able to recreate it when needed. The reverse process is called deserialization.

The object is serialized to a stream, which carries not just the data, but information about the object’s type, such as its version, culture, and assembly name. From that stream, it can be stored in a database, a file, or memory.

Serialization allows the developer to save the state of an object and recreate it as needed, providing storage of objects as well as data exchange.

As the name suggests, deserialization is the reverse process of serialization. It is the process of getting back the serialized object so that it can be loaded into memory. It resurrects the state of the object by setting properties, fields etc.

Q6. What’s the difference between a method and a function?

A function is a piece of code that is called by name. It can be passed data to operate on (i.e. the parameters) and can optionally return data (the return value). All data that is passed to a function is explicitly passed.

A method is a piece of code that is called by a name that is associated with an object. In most respects it is identical to a function except for two key differences:

Q6. What do you mean by Generic Function or Generic Class?

Generic classes encapsulate operations that are not specific to a particular data type. The most common use for generic classes is with collections like linked lists, hash tables, stacks, queues, trees, and so on. Operations such as adding and removing items from the collection are performed in basically the same way regardless of the type of data being stored.

Generic functions are similarly those which describe the algorithm without specifying a particular data type.