Plan Structure From the Very Beginning of Your Project

You might be wondering why you need to think about good structure at the very beginning of a project? Well for starters its good discipline, the more you do it the more natural it becomes and it will eventually save you time. Building multiple projects on a similar well-designed foundation also makes it easier to swap between projects. But the most compelling reason this lazy programmer has to design early is that if the prototype is already built with a good system design it’s super easy to just roll that on into a production project.

When software gets bigger, it becomes difficult to maintain that’s a fact. Here’s the trick, if you don’t maintain it earlier and keep it organized, you’ll have a hard time later on and will find yourself wasting time organizing the mess rather than focusing on features. These are a set of best practices we’ve found from our own experience and a number of other sites.

1. Avoid branching assets: There should always only ever be one version of any asset. If you absolutely have to branch a prefab, scene, or mesh, follow a process that makes it very clear which is the right version. The “wrong” branch should have a funky name, for example, use a double underscore prefix: __MainScene_Backup.

2. Each team member should have a second copy of the project checked out for testing: if you are using version control. After changes, this second copy, the clean copy, should be updated and tested. No-one should make any changes to their clean copies. This is especially useful to catch missing assets.

3. Consider saving levels in XML instead of in scenes:

4. Try to keep it short & simple: Take a small piece of your code and think: “How a kick-ass solution for that should look like?”. Try to keep your classes with few lines. A small class should have less than 100 lines. A mid-class, less than 400 lines. And the main classes less than 1000 lines. If you are passing this numbers, you are probably creating a god class and we really want to avoid that.

Folder structure helps your teammates to modify/search/ organize project and resources in parallel development. There are lots of ways to do this, and we will give some examples of things we have seen work well. But, really, use whatever works for you. If your project layout has good answers to the following questions, it is probably a pretty good layout. 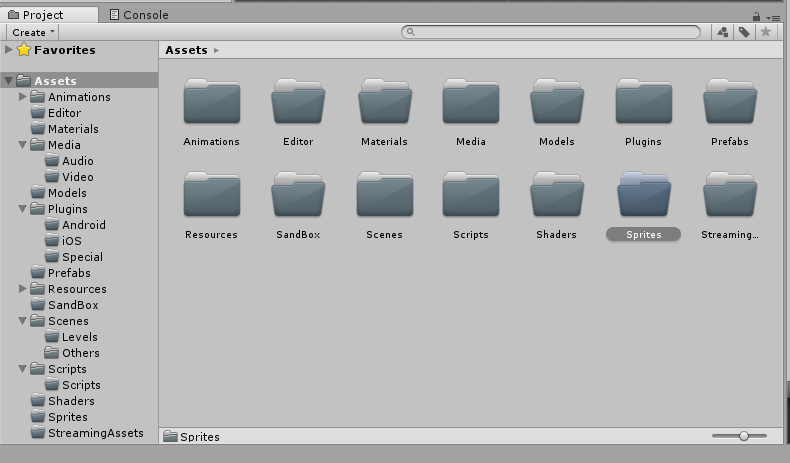 Most assets in Unity are combined into the project when it is built. However, it is sometimes useful to place files into the normal filesystem on the target machine to make them accessible via a pathname. An example of this is the deployment of a movie file on iOS devices; the original movie file must be available from a location in the filesystem to be played by the PlayMovie function.

The location of this folder varies per platform. Please note that these are case-sensitive:

Unity gives you total freedom. That’s why it can frequently get messy. and since we can’t talk about the organization without a proper project folder structure. here is the one we use in our practice.

Some Important points to remember:

Next to the project’s hierarchy, there’s also scene hierarchy. As before, we’ll present you a template. You can adjust it to your needs.

Some Important points to remember:

You may already know something about GIT, Subversion or any other VCS out there. As a matter of fact, “knowing something” is only a small piece of what you may learn. You should focus on learning about important but infrequently used features of VCS of your choice.

Why? Mostly because VCS systems are much more powerful than you think, and unfortunately many users are using these as nothing more than a backup and synchronized solutions.

You’ll find that, in any ordinary Unity project, there are quite a lot of files and folders, good news that only three folders should be kept under source control: Assets, Packages, and ProjectSettings. Others are generated from these three (mentioned below in green color font).

Here is a quick overview of all files and folders.

Before checking your project in, you have to tell Unity to modify the project structure slightly to make it compatible with storing assets in an external version control system. This is done by

This will show a text file for every asset in theAssetsdirectory containing the necessary bookkeeping information required by Unity.

Example: Creating a new project and importing it to VCS (GIT) repository

When checking the project into a version control system, you should add the,Assets,Packages and the ProjectSettings directories to the system. The Librarydirectory should be completely ignored – when using .meta files, it’s only a local cache of imported assets. When creating new assets, make sure both the asset itself and the associated .meta file is added to version control.

IMP NOTE: Each team member should have a second copy of the project checked out for testing if you are using version control. After changes, this second copy, the clean copy, should be updated and tested. No-one should make any changes to their clean copies. This is especially useful to catch missing assets.

Use prefabs for everything: Prefabs in Unity are the best thing you will find to share pre-configured hierarchies of objects. Generally speaking, try to prefab everything that you put on your scenes. This makes it easier to make changes that don’t require the scene to change.

The reason why you should use prefabs is that when a prefab changes, all the instances change too. Have 100 levels and want to add a camera effect on all of them? Not a problem! If your camera is a prefab, just add a camera effect to the camera prefab!

Link prefabs to prefabs; do not link instances to instances. Links to prefabs are maintained when dropping a prefab into a scene; links to instances are not. Linking to prefabs whenever possible reduces scene setup, and reduce the need to change scenes.

Don’t put meshes at the roots of prefabs if you want to add other scripts. When you make the prefab from a mesh, first parent the mesh to an empty game object, and make that the root. Put scripts on the root, not on the mesh node. That way it is much easier to replace the mesh with another mesh without loosing any values that you set up in the inspector.

Use singletons for convenience. The following class will make any class that inherits from it a singleton automatically:

For components, never make variables public that should not be tweaked in the inspector. Otherwise, it will be tweaked by a designer, especially if it is not clear what it does.  If it seems unavoidable, use [HideInInspector] tag. Don’t set things to public to make them appear in the inspector. Only properties or members that you want to alter from outside your class should be public. Instead, use the [SerializeField] (@SerializeField) attribute to make variables show in the inspector. If you have something that needs to be public but not designer editor then use [HideInInspector] (@HideInInspector). On the same note, don’t make things public just for the fun of it. The more public functions and member variables you have in a class, the more stuff shows up in the drop-down list when you try to access it. Keep it clean.

Don’t use strings for anything other than displayed text. In particular, do not use strings for identifying objects or prefabs etc. One unfortunate exception is animations, which generally are accessed with their string names.

Avoid using public index-coupled arrays. Define a class that encapsulates all the variables, and make an array of that: The code looks neater, but most importantly, it is harder to make mistakes in setting up the data in the inspector.

This will group variables in collapsible units in the inspector, which is easier to manage.

Document your setup. Most documentation should be in the code, but certain things should be documented outside code. Making designers sift through code for setup is time-wasting. Documented setups improved efficiency (if the documents are current). In my opinion, it’s always better to maintain ‘README.txt’ file inside your project repository.

Consistent naming and folder structure makes it easier to find things, and to figure out what things are.

A simple way to optimize component lookups that occur often is to cache the result. This is helpful for components that don’t change ever but are used often.

The latter code will run a lot faster since Unity doesn’t have to find the transform component in the game object each frame. The same applies for scripted components, where you use GetComponent instead of the transform or other shorthand property.

Built-in arrays are fast, very fast, so use them. While the ArrayList or Array classes are easier to use since you can easily add elements they don’t have nearly the same speed. Built-in arrays have a fixed size but most of the time you know the maximum size in advance and can just fill it out later. The best thing about built-in arrays is that they directly embed struct data types in one tightly packed buffer, without any extra type information or other overhead. Thus iterating through is very easy on the cache as everything is linear in memory.

3. Don’t use GameObject.Find to locate stuff, have it as a SerializeField and drag it in there instead if you can. Your designers are going to love you for this in the end, even if is a bitch to set up at times.

4. Avoid using foreach(). It calls GetEnumerator() on your list type, which will allocate an enumerator on the heap just to throw it away. You’ll have to use the more verbose C++-style for(;;) syntax.

5. Avoid strings. Strings are immutable in .NET and allocated on the heap. You can’t manipulate them in-place like C. For UI, use StringBuilder to build up strings in a memory-efficient manner, delaying the conversion to string until as late as possible. You can use them as keys because literals should point to the same instance in memory, but don’t manipulate them too much.

6. Use structs. Struct types in mono are allocated on the stack, so if you have a utility class that won’t leave scope, make it a struct. Remember structs are passed by value, so you will have to prefix a parameter with ref to avoid any copy costs.

7. Minimise use of function pointers. Putting a class method in a delegate or a Func<> causes it to be boxed, which triggers an allocation. I can’t find any way to store a link to a method without boxing. I’ve left most of my function pointers in there because they’re a massive boon to decoupling, and I’ll just have to live with the allocs, but I’ve removed some.

So this is the end of the beginning. I’ve just given a brief overview of how I handle structure. What works for us might not work for you so don’t be afraid to adapt things to suit your own preferences. The approach I used to get to here is to try something, tweak what doesn’t work, then try again. Put your heart, mind, and soul in the project even your smallest acts. This is the secret of success.